Asthma is a chronic long-term condition that can be managed but never fully cured. Asthma affects the airways of your lungs causing them to narrow and swell, resulting in wheezing and difficulty breathing. 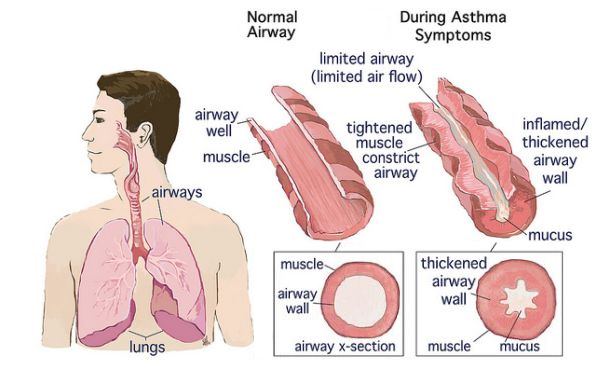 During breathing air goes in through your nose or mouth to the upper airways, at which point it reaches the windpipe, which then branches into two large bronchi to reach the lungs.

With asthma, the airways are oversensitive and easily irritated by certain triggers which are called asthmatic triggers.

Most people with asthma have an allergic-type reaction to external triggers including:

However for some people asthma is unpredictable and may also be caused by stress and anxiety.

An asthmatic trigger causes the airway walls to swell and the muscles around the airways to contract. The airways narrow and breathing through them often produces a whistling sound called wheezing. Mucus is produced from the lining of the airways, which can cause coughing and clog up the narrowed airways further.

This makes normal breathing more difficult, producing symptoms of asthma that can be mild, moderate, or severe and life threatening where hospital treatment is needed. An acute asthma attack requires medical intervention, but the type of intervention will depend on the severity of the attack.

The narrowing of the airways is reversible if the trigger is removed or if the inflammation is treated medically. Therefore, preventative treatment is used and can be managed by the patient themselves.

Asthma can be managed well, people with asthma can easily lead an active life but there is no known cure. Asthma is best treated when the patient and doctor work together to identify triggers and how to avoid them going forward.

Discussing this with your doctor and how medications can effectively help tailor a better treatment plan and asthma action plan that works for you. The correct inhaler technique is also very important and this should be checked and discussed with your doctor.

The following medications can be used alone or in combination to treat asthma doctor should be able to help guide you through with this.

Anyone with moderate to severe Asthma may be eligible for a government-subsidised flu vaccine and this is recommended to reduce complications associated with having influenza and asthma. 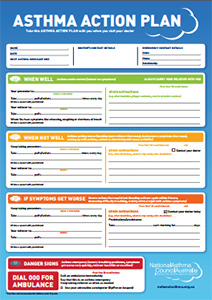 The asthma action plan you choose should be appropriate for the person’s age, language and culture. It should include general instructions for attacks, the reliever medication and dose.

An asthma action plan also informs of any danger signs such as:

Please discuss with your doctor or make an appointment to have your own Asthma Action Plan developed.