This year’s influenza vaccine will protect against four different strains of the virus, and will be rolled out in April, later than usual.

The new vaccine will be provided on the National Immunisation Program. It is an upgrade on last year’s vaccine, which only protected against three strains, and this measure is in response to a record number of cases being reported in 2015.

“There were 90,000 reported flu cases in 2015, that’s 25,000 higher than the previous record, so we know that more people are getting the flu” Federal Health Minister Sussan Ley said.

The vaccine is being made overseas, where traditionally a local manufacturer has made the vaccine for Australians in previous years.

A Department of Health spokeswoman said this explains the delay in the vaccine’s availability.

Parents are encouraged to seriously consider vaccinating their children against the Flu. In children, the symptoms of influenza can lead to complications such as chest pains and pneumonia.
Sanofi Pasteur’s FluQuadri will be supplied to children under three years old.

Pregnant women are also being encouraged to get vaccinated: This group is at higher risk of severe complications associated with the flu, and vaccinating against flu during pregnancy also provides protection for babies during their first months of life. The vaccine can be safely administered at any stage of pregnancy.

Elderly people, Aboriginal and Torres Strait Islander people, and people with chronic heart and lung conditions are also more vulnerable to complications from the flu. The vaccine is free to people in these more at-risk groups, with the Federal Government committing $40 million to the National Immunisation Program to ensure this.

More information on the flu vaccine 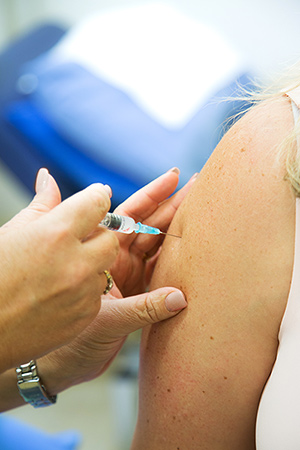 The flu vaccine works by binding to chemicals in the virus, inhibiting their growth and spread. However, the composition of the virus changes year to year, meaning vaccines are only effective for 12 months. This is why you need a flu shot every year.

The many strains of the flu that infect humans virus fall into three types: Influenza A, B and C.

Only types A and B cause severe outbreaks and disease, the symptoms of which include coughing, sneezing, high fever, chills, tiredness and muscle ache.

The Flu is transmitted through the air when someone coughs or sneezes, or when someone touches another person or surface with the virus.

The Department of Health estimates that each year, flu contributes to an average of 13,500 hospitalisations and more than 3,000 deaths among Australians aged over 50 years.

What to do if you already have the flu

• See your GP once you start feeling ill. Book an appointment and let reception know you have flu like symptoms. To avoid further spread of virus while in the clinic, please ask for a mask on arrival.

• Drink plenty of fluids and rest: Do not go to work or school

• Paracetamol is useful for bringing down a fever

• Avoid passing the virus onto others: Cough and sneeze into tissues and dispose of them quickly, keep door handles, taps, bench tops and keyboards clean, wash your hands with disinfectant, avoid visiting kindergartens or aged care facilities where you might pass your infection onto more vulnerable people.